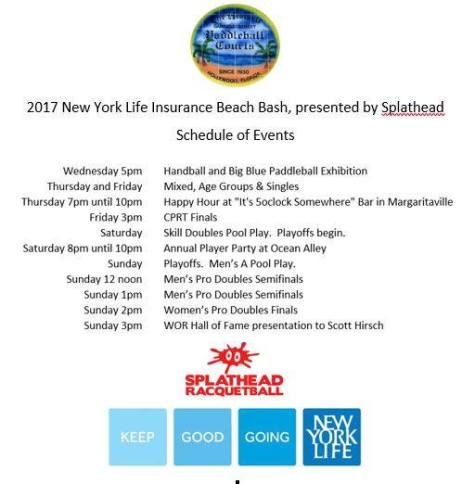 It’s that time of year where the best of the best in racquetball descend on Hollywood Beach to participate in what has become the “creme de la creme” of outdoor racquetball tournaments. Over 250 participants will compete in several different categories throughout the weekend to see who reigns supreme in the sport  of one-wall racquetball. Indoor and 3- wall outdoor players have come to enjoy the skill and reflexes needed to succeed in one-wall. Different angles and different swinging positions made the game very challenging to the purists in the beginning, but as the tournament has grown and the players have adapted, the once dominate NY players are now feeling the pressure from some of the dominant indoor and outdoor 3-wall players. This year should prove no different as top pros have been gearing up for this tournament for weeks by practicing their one wall skills in anticipation of competing against the world’s best.

Come out to Hollywood Beach, FL March 23 – 26 to watch some of the most exciting, hard hitting , and intense action from some of the greatest racquetball players on the planet. Not only will you enjoy the action, but also the friendly electric atmosphere that is created by the players,  and the staff that puts it all together.