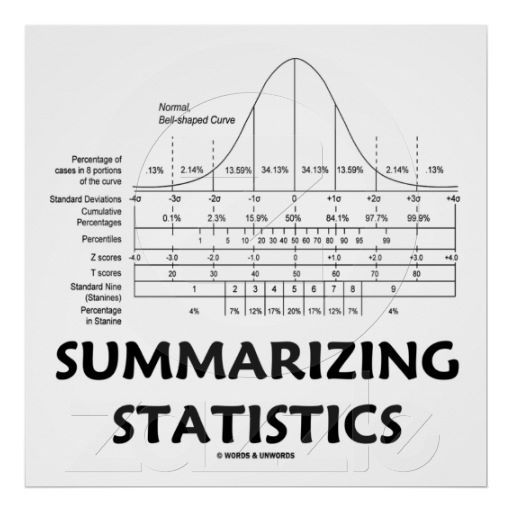 There has been tremendous growth in wall sports over the past few years. As participation increases so does the amount of events that take place throughout the various regions. In NYC there has been an explosion in the growth of handball, and a reignited passion for paddleball. Tournament directors are scheduling events months in advance, out of respect, so that other directors can have their event on an available day. It’s a great time to be a baller!

Rapid growth in any sport, just like in business, comes with growing pains. Decisions are made either by trial and error, or from past experience. Some people will agree, and others will always find fault. This puts the tournament director in a very precarious position. He or she has the ultimate responsibility of positioning the players on the chart, and more importantly deciding who is a “High B” or a “Low B” or a “C” player.  There are several reasons why this has become one of the toughest tasks of any tournament, and I’m sure that most players already are aware of those reasons.

There is truly only one way to track the performance of a player over time, and that is through data. A numeric system that takes into account the different levels of players, and tournaments in which they participate. For example, the following sports use a point system to determine the highest ranking team or individual: NHL, NASCAR, USA RACQUETBALL, WORLD OUTDOOR RACQUETBALL, and the PROFESSIONAL TENNIS ASSOCIATION just to name a few. A numerical ranking removes any personal opinion or feeling from the building of the chart. You can not argue with numbers; you can only strive to improve them.

We have created a ranking system that awards points based on the event, level of the tournament, and the finishing position. Each player upon registering for a sanctioned tournament will receive a player profile which will keep track of their performance in each sanctioned event that they enter. This data will be easily accessible to the player, and tournament directors on the website.

For this system to work, data has to be accumulated as quickly as possible.  Without it, tournament directors will have the same struggles as there have been in the past.  In addition to making this easier for tournament directors to run all levels of tournaments, this is a great tool that will allow players to check their standings against others.

The data cannot be relied on solely on it’s own at the beginning of this process.  Not because it’s not reliable, but because there is not enough of it.  The data will be more relevant as more data is compiled.  Therefore, it will be the unfortunate task for tournament directors to continue using the same system they have been using to rate B’s and C’s for now.  As more data is compiled it will become crystal clear how a player should be rated.  During the transition period a tournament director may use their judgment as to how to rate a player in addition to using the hard data.  Once there is enough data compiled on each player it’s the goal of the tournament director to use the data compiled.  There is no way to tell how long it will take to use only the data compiled on each player.  It’s really based on everyone’s complete commitment and dedication to making this work.

This rating system is in no way intended to rate who is an A player.  That system has been in place for years and works.  However, our system could be used as a tool to assist the current decision makers on who might be considered to receive an A card.

The criteria for the STATUS OF EVENT is the following:

A SHOOTOUT level should have these qualities: Shootouts should be targeting the local players. No real expectation of players getting hotel rooms or plane tickets. Shootouts should not require more than a 1 day commitment from the players. Should begin and end the same day.  Shootouts often allow for same day sign up. A minimum of 16 teams, or individuals for singles is required.

This level of event typically will require more than one day commitment. Not really expecting out of town draw, but a two day commitment from the players is usually required. Advance sign up is the norm. Most players will play more than one division. (Single and Doubles, or Age groups etc…) Still targeting mostly local participation. Maybe some hotel rooms needed, and some long drives, but very few airplane tickets. A full bracket of 32 teams is generally required.

A Super Series is expected to draw players from around the country. It’s a Grand Extravaganza on a National scale! Prize money should be enough to draw the top Pros and all other levels from around the country. Big Pro names in the draw. Nearly everyone plays more than one division. Everyone signs up in advance. Sometimes a multi-day commitment from players is required. Tradition may also fall into play for this designation. The King of the Court, Big Blue Ballers, Buddha Memorial, and Red Bull Slaps, and 3Wallball in Las Vegas to name a few are all Super Series Level – regardless of prize money etc… Those events have earned Super Series designation based on Tradition.

The points for these events will be awarded as follows: 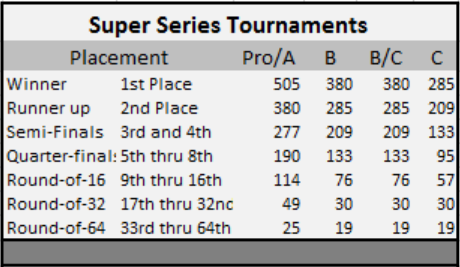 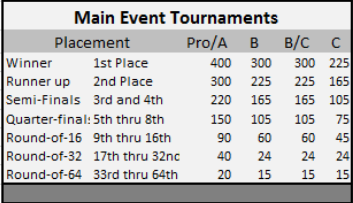 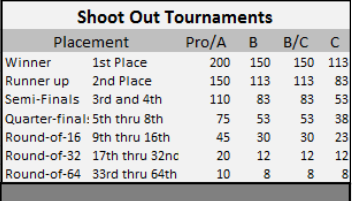